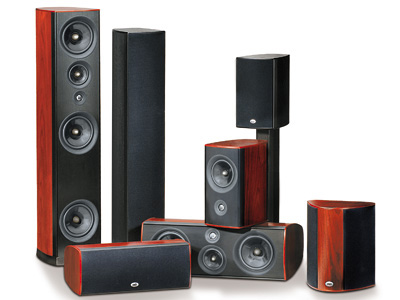 The Synchrony enclosures are a departure for PSB, incorporating extruded-aluminum corners and tapered rear panels that lock into veneered, seven-laminate wood-composite, curved sidepanels – the goal to ensure enclosures that are as non-resonant and coloration-free as any the company has yet produced. A new generation of extended-response titanium done tweeters ahs been developed, with lighter, stiffer voice-coil components and enhanced mechanical systems for improved high-output linearity. Similar advancements in linearity and dynamic headroom have also been extended to the line’s 6.5” and 5.25” cone woofers and the Synchrony One’s 4” midrange. All Synchrony cone drivers use a newly developed sandwich laminate diaphragm of woven fiberglass and compressed, felted natural materials, as well as ultra-rigid, cast aluminum baskets. Crossovers are fourth-order Linkwitz-Riley type.

The Synchrony One is a five-driver “five-way transitional” array, in which three identical 6.5” woofers sum their outputs across the lowest octaves but roll off at different frequencies throughout the midrange – a technique found to smooth response both on-axis and off. Each driver operates in a slightly different, fully isolated enclosure, and each is independently ported. The Synchrony Two is similar in its overall design, employing smaller 5.25” woofers. Its narrower footprint is ideal for more intimate settings, yet its performance is said to nearly match the S1. The One B is a 6.5” two-way capable of 40Hz low-frequency extension, and the Synchrony Two B, a 5.25” two-way model for more intimate settings. The Synchrony One C center channel is a large three-way design using the same drivers as the Synchrony One in a dual-woofer, horizontal layout. With 40Hz low-frequency extension, it’s ideal for the “large” center-channel setting preferred in high-performance multichannel systems. The Synchrony Two C is a more compact version of the Synchrony One C employing dual 5.25” woofers. Intended for side/rear-channel placement in multichannel installations, the Synchrony S is a dedicated “tri-mode” speaker with twin two-way arrays sourced from the Synchrony One B. It can be operated as a dipole-surround, as a monopole, or in bipole for maximum coverage, dispersion, and output.